Tripawds Supporter sites have no ads!
Skip to content

Tripawds is a user-supported community. Thank you for your support!

Phoenix and I have been to another consultation with her surgeon and her amputation is scheduled for Thursday morning! Stitches out 10 days after and will be up running around soon after that. He said she doesn’t bear any weight now on her bad leg so she should have no trouble adjusting to 3 legs at all!


To remove ads from your site and others, upgrade to a Tripawds Supporter blog!

Tripawds is a user-supported community. Thank you for your support! 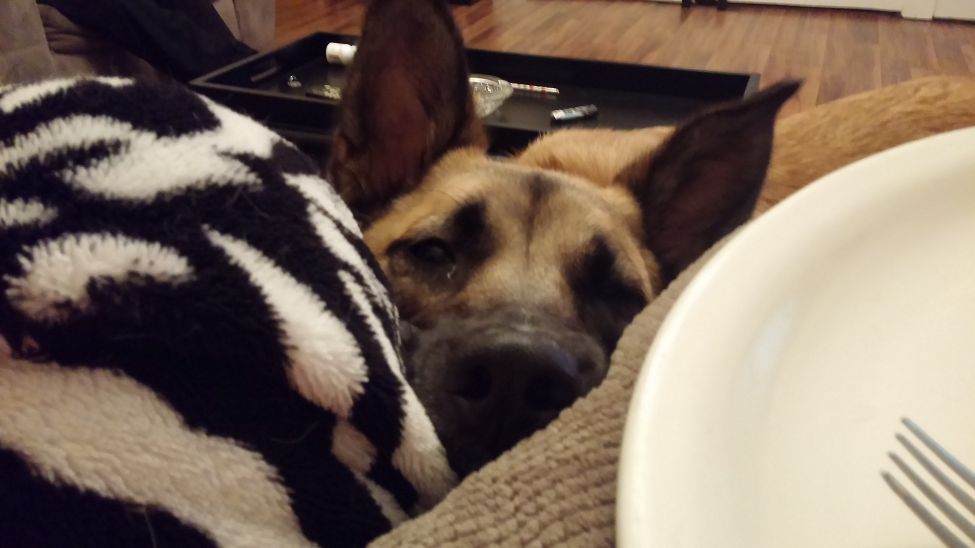 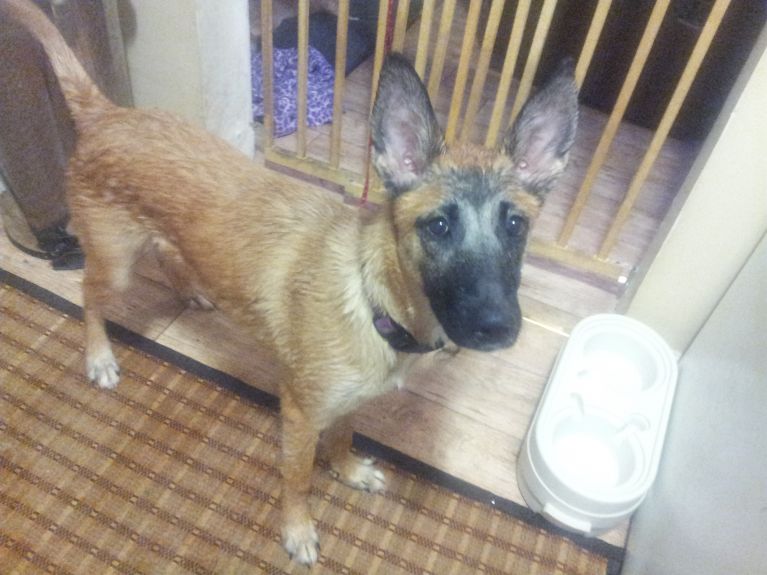 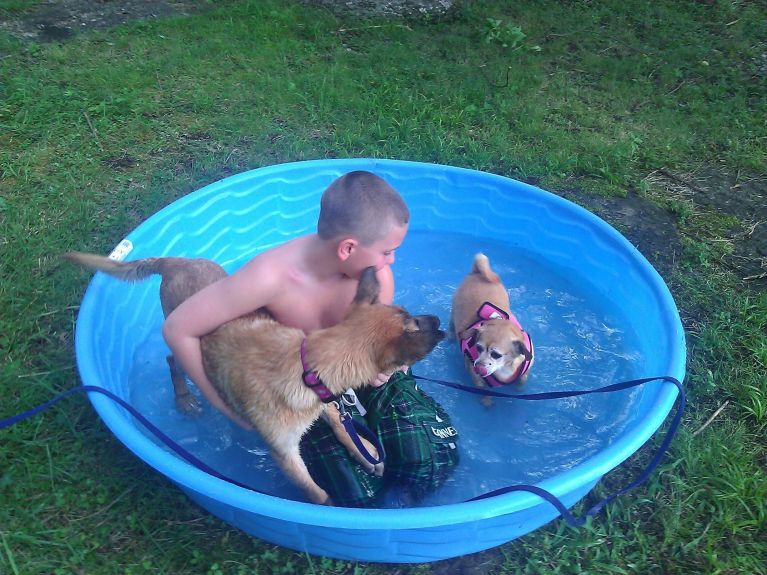 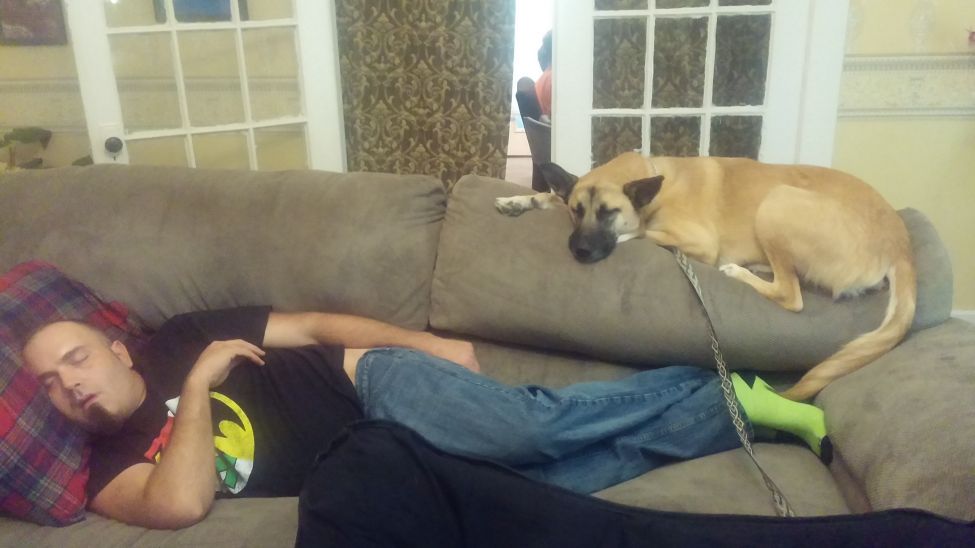 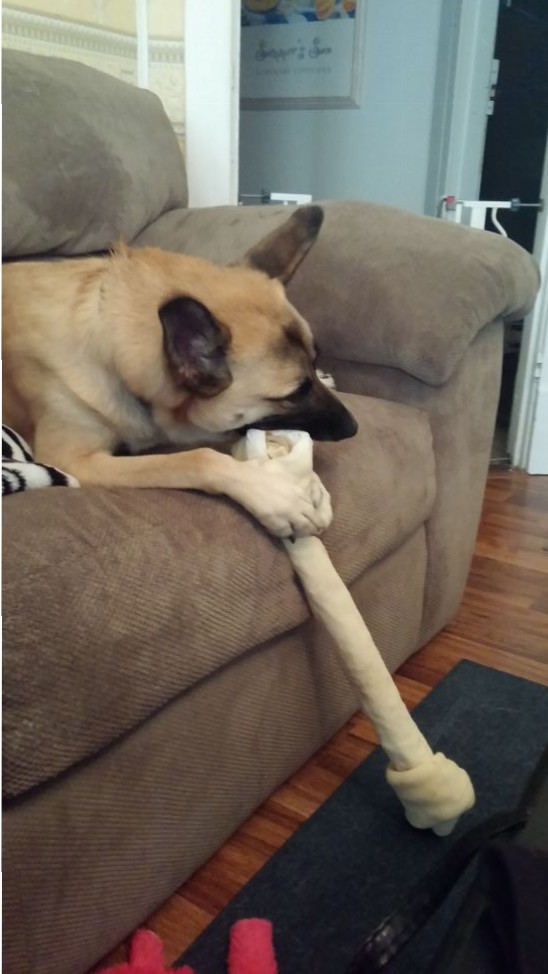 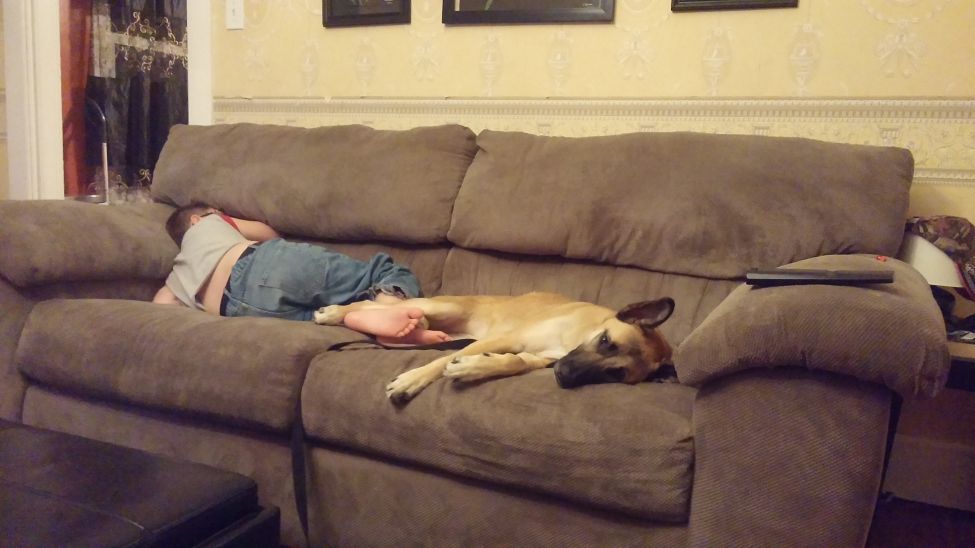 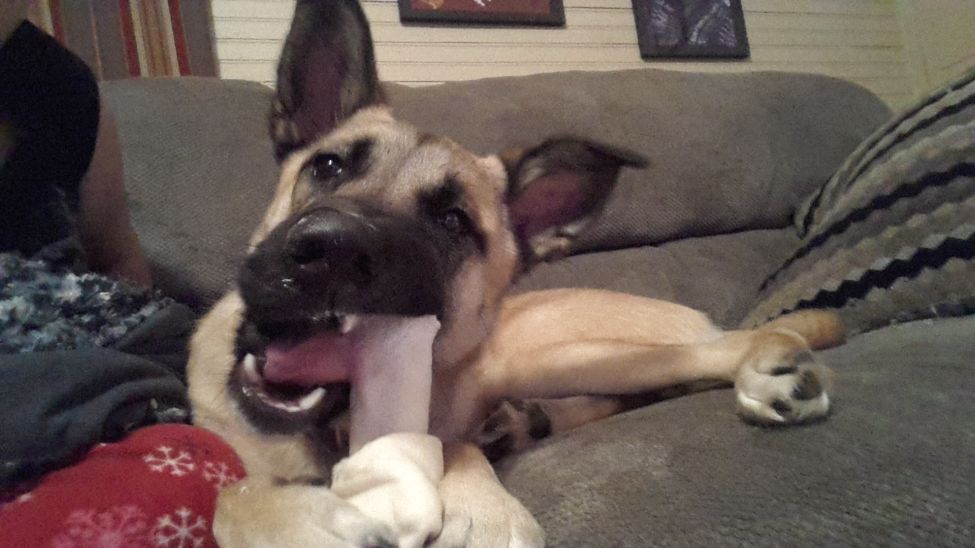 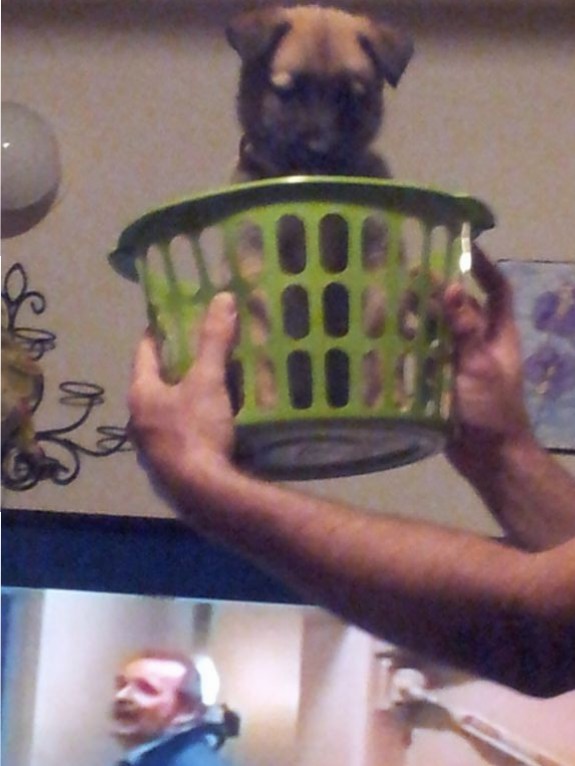 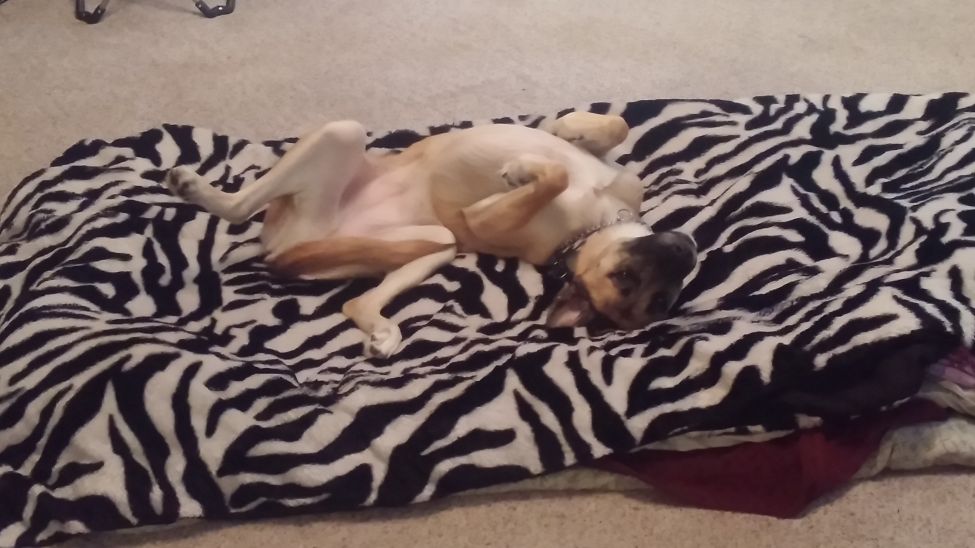 This is Phoenix Ann Puppy Snuggles Ali Jones, or better known and Phoenix or just Snuggles. Phoenix is 19 months old and has just been diagnosed with osteosarcoma. Phoenix has already faced many struggles in her short life and is facing another one. As we await her amputation, I feel it’s important to get to know this amazing girl and what a fighter she is.

My fiancé told me one night that his friend from work said his dog had just had puppies and asked if I would be interested. Of course I would since I had mentioned it several times over the last few months. We made plans to go see them and pick which one we wanted even though they weren’t ready to leave yet. He told me about one little puppy who had been dead when she was born and had been resuscitated, who they called Miracle. I don’t know why, but I wanted her without ever seeing her. I knew she was special.  We named her Phoenix like the Phoenix rising from the ashes. We went to see her and fell in love with her instantly, with her little tiny ears and skunky smelling puppy breath. As soon as she was 8 weeks old, we went to pick her up and brought her home where she walked in like she had been there forever and had no trouble adjusting whatsoever. We had another dog at this time, Bug, who was our 10 year old Chihuahua who didn’t care much for Phoenix but they figured it out anyway.

Phoenix grew big and strong quickly and got into everything. At 7 months old, she got sick and started throwing up pieces of the bottom of a shoe. We took her to the vet for what we assumed was probably an intestinal blockage. To our surprise, she was diagnosed with parvo. We were told before she came home with us that she had been wormed and vaccinated and was ready to go. I have never experienced parvo but from what I have heard, it’s basically a death sentence to puppies. Especially since we did not have the 350$ per day to treat her in the hospital, and even then she did not have very much chance of survival. We could however take her home, treat her at home and return for daily treatments at half the cost. This method decreased her chances of survival significantly but we wanted to try. We took her home. We forced pedialite and canned cat food from the vet in her every 2 hours around the clock. My fiancé and I both slept in shifts in order to force fluids and watch her. Her diarrhea didn’t set in until a few days after her diagnosis and seemed to make very little progress and we were being pressured into euthanizing her before the bloody diarrhea started. As the days passed she would go 24 hours with no vomiting and no diarrhea, then 36, then she started to pick at her food on her own. She returned to the vet for another treatment and after she was wrestling with the doctor and took a treat from him, she was released from treatments and sent home. This is how she got Ali added to her name. Her daddy said if she beat parvo, he was adding Ali to her name after the greatest fighter of all time.

About 2 months ago, Phoenix was limping when she came out of her crate. She was fine the night before so I watched her and by the next day, her limp was gone. Over the next couple weeks her sister Bug had a sudden collapse and was non responsive. She finally came around and was very sluggish. She was taken to the vet the next day and was diagnosed with a tumor attached to her liver and kidneys. It wasn’t visible so we had no idea and she showed no signs of being sick. We were told she didn’t have much time left so we took her home and after about a week of waiting and keeping her comfortable and deciding whether it was time to euthanize, Bug passed away in her sleep at home. I hated finding her there but I was relieved I didn’t have to make the decision and that she passed away at home. Shortly after, Phoenix’ limp returned and this time did not go away. She was taken to the vet and was diagnosed with a mild torn ACL in her back knee and was sent home with carprofen and gabapentin for pain and on strict crate rest to see if it would heal before we considered surgery. She suffered a few falls from slipping on the floors and the cries of pain she made were unbearable. We scheduled surgery with Dr. Story, who had many years experience in orthopedics. I took her in and went home to wait on the call for an update on her surgery. I was told her ACL was normal and that after all the fluid was drained off her knee, xrays revealed a possible bone tumor. I gave permission to run a chest xray to rule out a fungal infection and to send it to a radiologist for a second opinion if needed. In the meantime I made my way back to the hospital to pick her up and was told they were 99% sure it was bone cancer. Less than a week later we went for a consultation and exam with the oncologist, Dr. Vancil. He performed another xray and confirmed osteosarcoma and now a hairline fracture in the affected knee. Her chest xrays are clear, it has not spread anywhere else yet, her blood work is normal aside from low grade anemia so she has been given a good prognosis and an excellent candidate for amputation in combination with chemotherapy.

Phoenix is in pain despite having pain meds and is going in for another consultation with the surgeon in the morning. I am working through my guilt of making the drastic decision of removing an entire leg but if this is what it takes to take away her pain then the decision is made. Right now she can’t jump on the couch to snuggle with mam when she’s sleepy, she can’t run around outside, she doesn’t show the same enthusiasm for barking at the neighbors from the window when she see’s them have the nerve to come outside to their own yard, she doesn’t mind as much when those nasty squirrels sit on the fence looking in at her, she doesn’t get sassy and talk back to daddy when he has to correct her for getting too rowdy and running laps through the house or begging for food. Our dogs are special to us in many way and I truly believe she is special, I believe she is meant to live. She has always had the strongest bond with her mama, she has licked the tears from my eyes when I cried after losing our Bug, she snuggles with me when I feel bad, and although she adores her daddy (the fun police) and loves her granny, mama is #1. We will never give up on this sweet baby until she says it’s time to go and now is not that time.

Add an excerpt to your posts to provide a summary for readers in many blog themes!

Read this for important information!

Welcome to Tripawds. Please read on for important tips. This is your first post. Edit or delete it, then start blogging. Don’t miss our helpful WordPress tutorial videos if you need help getting started with your new Tripawds blog.

Please publish a new post (or edit this one) to share your story. The Tripawds community is only notified of new blog posts in the Recent Posts widgets found throughout the News blog and discussion forum pages. Members will not be notified of any comments made on this default first post. You can also choose to edit or delete your sample page.

Publish a blog post or your site may be deleted!

Please be sure to publish at least one blog post to let us know you that you may use your blog. NOTE: Failure to do so may result in your site being deleted. If you upload photos to your Media Library, but fail to publish a post, we’ll never know they are there and they may be gone forever!

Another way to ensure your site does not get deleted, is to upgrade it with a Tripawds Supporter subscription.

By default your site will be indexed so Tripawds members will be notified of your update in the Recent Posts lists throughout this community. If you change your Privacy settings to discourage search engines, your posts will not be indexed!

To limit the amount of spam you receive, any first comment a reader makes on your blog will require moderation. Be sure to “Spam” any inappropriate comments, and approve those from your readers so their future comments appear immediately. You can change your comment options from the Settings -> Discussion tab in your dashboard.

Tripawds Blogs shall NOT be used for fundraising purposes.

Direct appeals for financial assistance to help cover care expenses will be deleted without notice. Everypawdy in the Tripawds community faces their own share of high expenses related to surgery, recovery and care. Veterinary financial aid resources can be found in the Tripawds News blog. Please see the Tripawds Fundraising Appeals Policy for more information. Thank you for your understanding.

Thank you for sharing your story, and happy blogging!

About Your Tripawds Blog:

New Tripawds Bloggers: Please review your default first blog post at left for lots of helpful links for getting started with your blog or review the Help Videos in your dashboard. Edit these widgets from your Appearance settings to remove this notice, upload a custom header photo, or choose from 130+ themes, and much more!

Phoenix' upcoming battle with Osteosarcoma is brought to you by Tripawds.
HOME » NEWS » BLOGS » FORUMS » CHAT » YOUR PRIVACY » RANDOM BLOG


Tripawds Supporter sites have no ads!